I saw many yarn stores in Lisbon and Madrid but they are typically small and carry Katia or Pingouin yarn which are available in the US and cheaper here too.  Although they have a lot of fabric stores that carry notions, laces, buttons etc that are much more extensive than anything at Joanns.  There are a bunch of them near the Lisbon Design and Fashion Museum.

As I was walking near Plaza Mayor in Spain and saw these street posts. 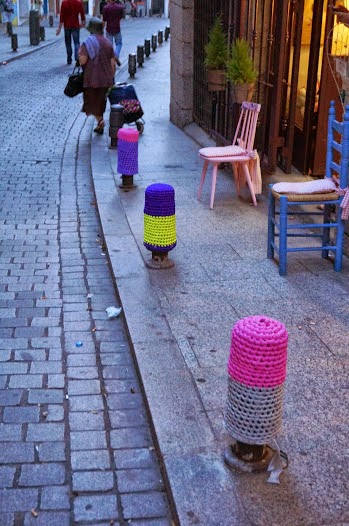 They are in front of a yarn shop, definitely good advertisement.  There was a class or knitting group inside so I didn't stay since I really didn't plan to buy any yarn.

I was walking in the Alfama district of Lisbon and saw this knitting machine in the window of a sweater shop.  Nice sweaters too, the sort of minimalist stuff that I like. 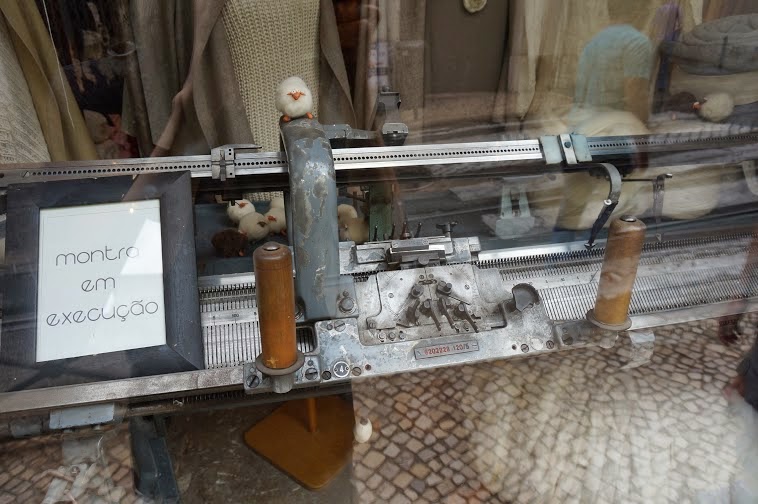 This was right before a pickpocket opened my backpack purse, I felt someone following me closely but it looked like a couple of local young ladies so I wasn't alarmed at first.  Then I got uncomfortable and called out to someone just to get attention and a local women yelled, she's trying to rob you. Luckily nothing was taken just an unzipped compartment.  That was the first hour I was in town.  I finally had to wear my backpack in front to avoid attention, as several pairs of men and women were following me with interest during the next hour or two.  They left as soon as I rotate the bag around (I like backpacks because they don't hurt your shoulders but they won't work in Lisbon).  Even though there was nothing valuable in the backpack (my comb, mirror, chapstick, etc), I got tired of the attempts. Wisely I wore my valuables.  Those travel pants and shirts with the invisible zipped pockets are great.  I even sewed an extra pocket to a "Lucy" skirt and a pair of "Royal Robbin" pants so they fit a passport.