I was shopping a few months ago and a man was buying a ton of tennis balls, he said his wife used them in the dryer, makes the clothes dry quicker because it prevents them from clumping together. Now I thought that's a good idea but I don't want my clothes to smell like tennis balls and be exposed to chemicals are released at high temperature, after all tennis balls are designed to work at ambient temperature.  So I made some felted wool balls out of an old wool sweater that was stained and some rough wool yarn. 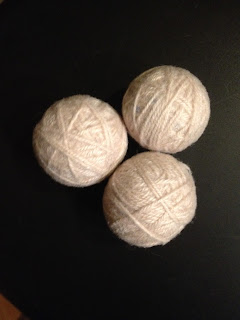 I was Christmas shopping yesterday and saw that Eileen Fisher is selling 3 balls for $29, comes in a nice bag and that her learning lab is offering a class on how to make them for $75.  So I thought I would post how I made mine here.  These are tennis ball size, Eileen Fisher's are bigger maybe 4.5" in diameter, but you can make them bigger by using more stuffing or wrapping more layers of yarn.

I cut the sweater into strips about 5" long.

Rolled up each strip tightly into a cylinder.

Folded in half and sewed into a sort of ball. 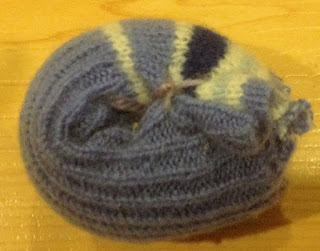 Then wrapped yarn tightly around it until you can't see the sweater anymore and looks like a ball of yarn. 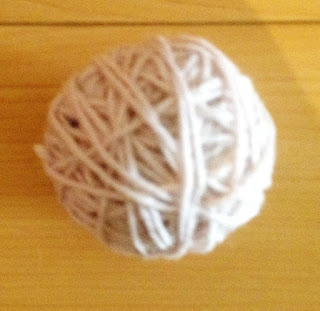 I used a needle to pulled the yarn through the ball tightly so it won't unravel.  I washed and dried it several times before it got to the final look.  The yarn unravelled a little the first time in the wash but I just rewrapped it.  Some of my knitting friends suggested using pantyhose or a mesh bag to keep it from raveling but I didn't and it worked OK.